If it the Internet Blacklist passed, could this be a way around? Though, could this also promote mischief at the same time?

People involved in a the Tor project to maintain a secret layer of the internet have turned to Amazon to add bandwidth to the service.

The Tor Project offers a channel for people wanting to route their online communications anonymously.  It has been used by activists to avoid censorship as well as those seeking anonymity for more nefarious reasons.  The Tor Project has been praised for offering people living in repressive regimes an opportunity to communicate freely with others without fear of punishment. Activists have used it in Iran and Egypt.

Use of Amazon’s cloud service will make it harder for governments to track, experts say.

Tor – Short for “The Onion Router” or “The Dark Net”

The Tor developers are calling on people to sign up to the service in order to run a bridge – a vital point of the secret network through which communications are routed. 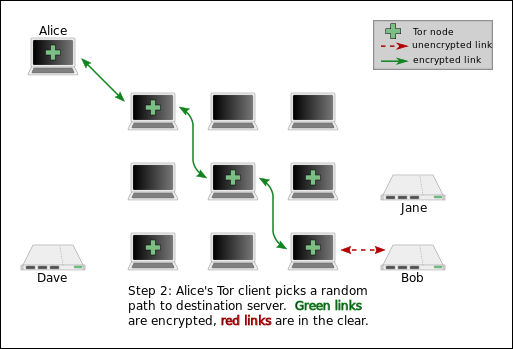 “By setting up a bridge, you donate bandwidth to the Tor network and help improve the safety and speed at which users can access the internet,” the Tor project developers said in a blog.

“Setting up a Tor bridge on Amazon EC2 is simple and will only take you a couple of minutes,” it promised.

Users wishing to take part in the bridging project, need to be subscribed to the Amazon service.

It normally costs $30 (£19) a month. However, Amazon is currently offering a year’s worth of free storage as part of a promotion, which Tor developers believe their users will qualify for.

“It creates more places and better places to hide,” he said.

“With cloud services it will be easier to create a substantial number of bridges. Amazon is hosting millions of applications and it will be difficult for governments to distinguish between normal access to Amazon’s cloud and Tor access,” he said.

Tor is short for The Onion Router, so named because of the multi-layered nature of the way it is run. It is also known as the dark net.

It has been in development since 2002 and works by separating the way communications are routed via the internet from the person sending them.

Data is sent through a complex network of ‘relays’ or bridges run by volunteers around the world. When someone receives data routed via Tor it appears to come from the last person in the relay rather than from the original sender.

Internet addresses are encrypted to add to anonymity.

But it is also used to distribute copyrighted content.  The people behind the Newzbin 2 website are suggesting its members use the network to continue sharing illegal downloads after BT blocked access to the site in the UK.

“There is an ugly face to Tor,” said Mr Shulman. “Studies suggest that most of the bandwidth is taken by pirated content.”

While cloud services are unlikely to make Tor mainstream, the more bridges there are, the more anonymous the network becomes.

Imperva research estimates that there are currently “a few thousand” exit nodes on Tor – the points at which communications reveal themselves on the wider internet.

“There could be far more other nodes but it gives a sense of the size of the community,” said Mr. Shulman.

Access to Tor is not limited to fixed line communications.

Android users can access it via an application called Orbot and earlier this week Apple approved Covert Browser for iPad to be sold in its App Store, the first official iOS app that allows users to route their online communications through Tor.

Say NO to the Internet Blacklist Bill

Hollywood lobbyists are pushing a new bill — the “E-PARASITE Act” — that ends the Internet as we know it. This bill kills jobs, censors the web, and threatens the legal framework that’s allowed Twitter, Facebook, and YouTube to flourish.

What doesn’t it do?

Actually prevent people from accessing pirated movies, music, and goods. Anyone looking for pirated content can simply visit the IP address of an infringing site instead of its domain name.

2020 Guide to Conducting an IT Vulnerability

Steps That Ensure Greater IT Efficiency

Listen to Audio Information technology is one of few occupations that provide real-world functionality, security, …